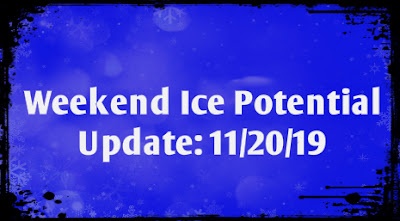 In my group Weather Talk: Schuylkill Edition, on Facebook, I forecast for Schuylkill County and surrounding areas. In this article, I'm going to focus mainly on those surrounding areas. Honestly, based on today's consistency from the GFS, I'm pretty much ruling out any ice this weekend in Schuylkill County. I'll show you a few pictures below to give you a general idea on where I expect ice to set up. In Eastern PA, I'm referring to mainly the Poconos which also includes our neighboring county of Carbon. I'll time it all out for you, so if you have a few minutes, you'll leave this article knowing some pretty good info about the weekend storm.

The storm is moving in from the west; it's a fast mover. So Western Schuylkill and surrounding areas will see rain kick off first. Radar will start to light up around nightfall. Further East, you'll see rain move in a little later, say 6:00-ish? In the image below, you can see the entire area under rain at 7:00PM Saturday. I believe this model, the GFS, has a good idea on timing for this event. 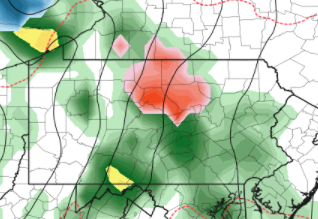 When does the storm end?

Like I stated earlier, this is a fast mover. So everyone will see this event wrap up BEFORE daybreak on Sunday. It won't be a lot of rain, but it will be enough to cause headaches for those in the Poconos. I'll get to that in a second. But first, the image below shows you 7:00AM Sunday. Those little blotches of green suggest some drizzle or a light rain shower could linger on the back side. But for the most part, the event is over by this hour... 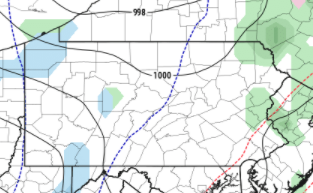 I'm going to show you the 3 latest runs of the GFS. Why? To show you they are pretty consistent in Eastern PA on where the ice sets up. First up, the 12z afternoon run. As you can see below, ice in Carbon, Luzerne and the Poconos... 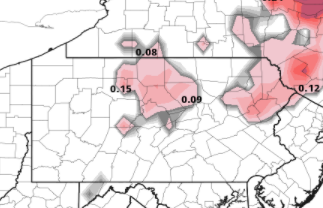 Next up, the 18z GFS. This run is a little more amped on the amount of ice that falls. But it does have the same general idea for Eastern PA.... 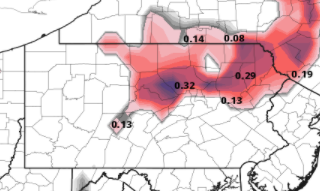 Finally, the 00z GFS which just got done running. I believe this run is a good indicator where ice will set up from this storm. In Eastern PA, mainly Carbon and the Poconos would be the bread winners on this icing event.... 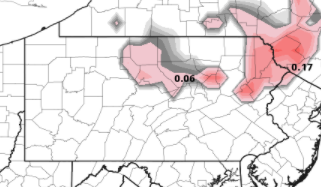 As always, check back for more updates. If this storm trends colder, Schuylkill County could be included in the ice. However, at this time, I do not believe that will happen. This will be an elevation dependent ice event that occurs mainly in the Poconos and Carbon County of Eastern Pennsylvania.